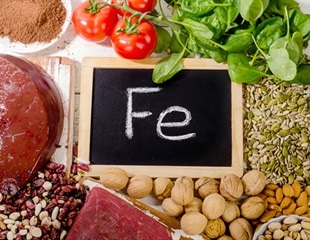 Iron is an essential element which is not made by the body. Our bodies rely on the food we eat for a healthy supply of iron.

Hemoglobin is the part of the red blood cell that gives blood its red colour. hemoglobin is necessary for the transportation of oxygen from the lungs to the tissues, while myoglobin accepts, stores, transports and releases oxygen.

About 25% of the iron in the body is stored as ferritin. This is found in the cells and circulating in the blood. Men have about three times more stored iron than women do. If the iron intake in the diet is too low, the stores become depleted and the hemoglobin levels start to fall.

Anemia occurs when the body does not have enough iron to produce hemoglobin and the iron stores become depleted.

Initially there may be no noticeable symptoms, but as the body becomes more depleted, the symptoms start to become obvious.

Causes for iron deficiency anemia include:

Symptoms of iron deficiency include:

Many of these signs can overlap with other nutrient deficiencies so it’s important to check that iron deficiency is really the problem before supplementing.

Overloading the body with iron can be dangerous because excess iron accumulation can damage the liver and cause other complications.

Foods rich in iron include:

Eating foods rich in vitamin C or adding a vitamin C supplement to an iron supplement can be very helpful for optimal iron absorption.

Listen to my interview with Brad Kirsten from Radio Cape Pulpit on 27 August to learn more.

Listen to my next interview on Thursday at 7.45am